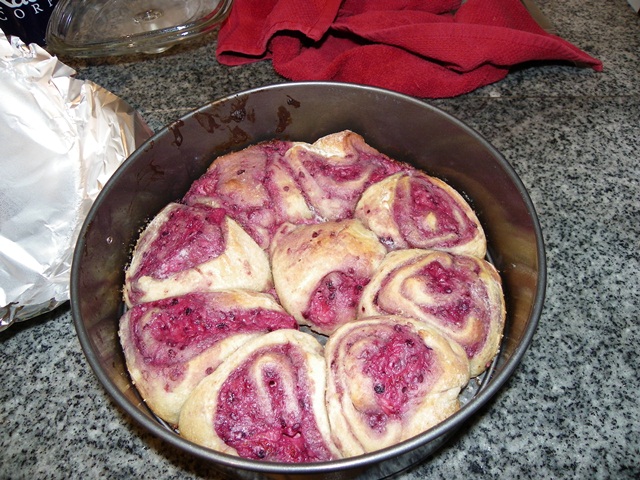 I found a recipe for blueberry cream cheese monkey bread. However, as usual, I didn’t have all of the ingredients. I even went to the store and bought things. Still when it came time to make it, I was missing a few things. I was missing blueberries. I ate them with my yogurt. I should say that I had every intent to make these days ago, but ended not having the time. So the blueberries didn’t last. But I did have strawberries and blackberries. So, first substitution. Then I only got 1 package of dough at the store. Because I wasn’t paying enough attention. So, second problem. But I am nothing if not adaptable. I don’t need to make that much anyway. Here is what I made.

Strawberries (I didn’t use a measurement, just cut up what I had)

Blackberries (Same as above)

First, put that cream cheese on the counter several hours before you start making this. If you don’t have a food processor, you have to use a hand mixer. Cream cheese, if not properly softened, does not lend itself well to the hand mixer. This is a lesson I learned long ago when making my special banana pudding (recipe for that later).  Okay, go ahead and get your berries out, too. Cut the strawberries into quarters, if they are large. Smaller strawberries, just cut in half right now. Leave the blackberries whole. Rinse thoroughly in a strainer. Let these sit for a while to drain and dry out a bit. Alright, your cream cheese is soft and your berries are drained and somewhat dry.  Cut the cream cheese into small squares, put into medium bowl. Do not put the whole bar in there. It’s just easier on yourself to chop it up. Trust me.  Chop those berries into smaller bits, put into the bowl with the cream cheese. Put your honey in the mix. Mix on medium until well blended. Okay, now get out your dough. Do not get this out sooner. Learn from me people. I ended up taking it out too soon and got too soft and was a slightly gooey mess. Unravel the dough and lay flat on a slightly floured surface. Spoon the filling onto the dough and spread out, leaving about an inch around the edge. Roll like a cinnamon roll or jelly roll. At this point, if you put too much filling in, it’ll start oozing out the edge and then you have a mess.  Wrap in wax paper and place in fridge for a couple of hours so it’ll be easy to cut into 1″ pieces. Preheat oven to 375 F. Grease a pie pan or bundt pan. Place your pieces in, sides touching. Dab some butter on top and some raw sugar. You can use regular sugar, if you like. Place in oven for 35 minutes or until dough is golden brown. I ended up with much less than the original recipe since I only had one can of dough. But now I have lots of the filling leftover. I guess I’ll have to make something else with it.