This day started with toast. And ended with, well, I don’t remember. I’m sure it was better than toast.

We went to church in the morning. St. Paul’s Cathedral to be exact. I did not include links to sites in previous blogs because I did not think of it until now. So, I will be doing it in the future. There is a great deal of history inside of St. Paul’s. They do hold services here as well. In fact, there was a small chapel where a couple was getting married, so we had to clear out. The cool thing about St. Paul’s is that you can climb the dome. To the top. It works out to about 271 steps. I went up part of the way. The rest of the group made it to the top. I am told it was great. I have no regrets. I was also told that the steps got smaller and the walls more narrow. No thank you. Really the most incredible thing about St. Paul’s was the mosaics. They were definitely in the WOW! category. I can’t show you pics, because they do not allow you to take photos inside. Oh, and a Henry Moore sculpture. They also have different art exhibits, changing on a regular basis. The current installation was an exhibit by artist Gerry Judah.

After St. Paul’s, we decided to go to one of the oldest pubs in London, Ye Olde Cheshire Cheese. They don’t have their own website, so this is the Wikipedia link. This one we found pretty quickly, as we were now masters of finding pubs. YOCC was a pretty cool place. When you step in, you see where the stoop has worn away from so many people coming inside. They have a guest book that dates pretty far back, from what I hear. However, it was not out when we were there. The upstairs dining area was not open, so we had a pint in the cellar. It was dark and all you would expect from a bar in a basement. But pretty neat anyway. Pints drank and paid for, we were on our way.

Tower of London was the next stop. So many things at the Tower. They used to hold VIP prisoners. They stayed here before they cut off their heads or hanged them. I guess it depended on how important you might be. Some were drawn and quartered first. Good times. The Crown Jewels also live here. We walked through and checked them out. Diamonds as big as my fist in crowns. Rubies, sapphires, pearls, garnets, emeralds, and did I mention diamonds? Also, the armor of kings and their horses. And more guys in fabulous hats and red jackets with very serious guns. Oh, and this awesome Steampunk Dragon.

My sister and I got turned around and got on the wrong bus. After a great deal of wandering about London, we asked some folks for help. They guided us to the nearest Underground. We would have been able to find our way from there, but they had several lines closed due to construction. Fuck it, we took a cab. 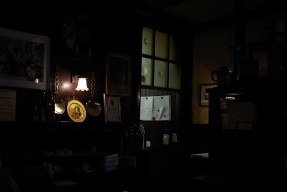