So, I tried to make this. If you don’t want to click on that, I’ll explain. It’s a recipe for cheesy zucchini breadsticks. Looks amazing and easy. Here’s the original recipe.

So, I shredded a bunch of zucchini. I also had some yellow squash, thanks to a friend of mine. So, I put shredded that and put that in there, too. I did put some grated garlic in the mix, too. Other than that, I followed the recipe. It looked just like the picture! I pulled it out of the oven but it was stuck the foil. Now, I always use foil because easy clean up, right? Also, I oiled the shit out of that foil. But still it stuck to the foil. So, now what? Throw it out? Hell no. That’s not my way. So, instead, I made a zucchini / squash bake. It was not bad. It definitely tasted like garlic bread with cheese. I still have some of the shredded zucchini and squash left, I may try to make some little pancake patties with it. I’ll let you know how it turns out. 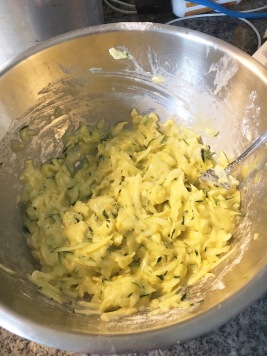 After scraping it from the foil, this is what i had left.

I put some tomato sauce, lots o’cheese and baked until the cheese was melty and oh so yummy