Of cats, bats and heroes

It was 2:30 am. My husband and I were sleeping deep. When the cats woke us, running through the bedroom, making chirruping noises. I sat up, “What in the hell is wrong with you guys?” They had been very restless the last few nights. But this time, it was different. My cat, Hyler, jumped up onto the bed. I noticed that he had was watching the ceiling with great interest. “Oh, he’s got a bug or something.” I said and laid back down. Then something flew at us from the ceiling. We both jumped.

“A bat, it was a fucking bat.” Said my husband, who hates bats. I mean they give him the willies like snakes do most people.

So, there we were hiding under the covers. The bat had some how gotten into the movement of the ceiling fan. He did not get wrapped up in it, but was following it around the ceiling for some reason.

“Okay, I’m going to get a towel and knock it down. Stay under the covers.” My brave husband said. He crawled out of the bed, keeping his head down. He turned the fan off and the light on. And because I haven’t put the laundry away, there was a basket of towels sitting the floor next to the bed (don’t judge). He grabbed a towel and started swinging at it. He got it into the bathroom, where we locked him in. Unfortunately, my cat was in there with him. My husband went downstairs to get the broom. I tried to convince my cat to come to me. But he was locked on that bat flying around. He thought it about when I got the treats out. But no, he would not leave. So, I put a towel on my head. I don’t know why, it just seemed like the thing to do. I put a towel on my head and crouched my way into the bathroom. I grabbed my cat and pulled him out. My husband came in with the broom.

“I am going to open the window, you shoo him this way with the broom.” I said.

“Good idea. But I’m going to knock him out first.” He starts swinging the broom and hits the bat hard enough to knock him onto the floor. He was not dead. We wrapped him in a towel and placed him outside. He was squeaking when we picked him up. When we checked this morning, he was gone. So, I’m going to assume that he woke up and went home to rest.

So what did I learn? My husband is a brave and special man. Did I mention how much he hates bats? And my cat is either stupid or a great hunter. And it is very important to keep up with rabies vaccinations even if your animals stay inside. 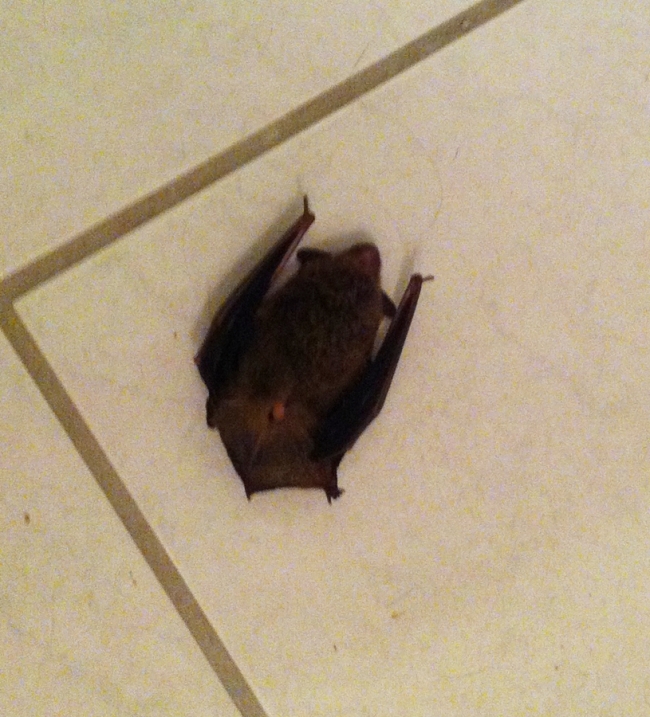 2 thoughts on “Of cats, bats and heroes”