I finally took a vacation. I went to London and Dublin for 2 weeks. So guess what? You will get the joy of hearing about my trip and seeing some of the photos here in the next few weeks. This is the first entry of several.

My sister was going to be teaching a study abroad course and asked if I wanted to go. Yes, yes, I did want to go. So, it would be me, her, and eight of her students.

I had to drive to my sister’s house – 6 hours away. It threatened rain and storms the whole time. It did not really storm until I got fully immersed in the mountains, then it rained. It rained rivers and the lightening was eerily striking all around the road. The clouds were very tornado like. So, I started to wonder what the hell to do if I see one. Do I stay in the car? Get out of the car and lay in a ditch? That’s what they told us when I was a kid anyway. Fortunately, I did not see any. I made it to her house with no incident. The next day, however, was a different story.

My sister lives in a very rural area with curvy roads. I don’t mean, “Oh, look a curve.” I mean, “Oh, look less of a curve.” I have been known to get a little queasy on roads like that, but nothing too bad. With that said, we left to meet the bus that would be taking us to the airport. By the time we got to the bus meet, I was feeling a little queasy. But nothing too bad. My sister gave me her Sea Bands to help. I thought I would just go to sleep and be fine. We weren’t 30 minutes out before I was calling for a bus stop. I got out, took a deep breath, put my head between my legs for a minute. I was put in the front seat and given two Dramamine. I pretty much went to sleep after that, but at some point, I woke. I woke knowing that I was going to vomit. I asked the driver to pull over. But there really wasn’t anywhere for her to go. Too late, up it came. I had a small plastic bag which helped. It was just water as I had not eaten anything that day, thank goodness. So, I had to ride to the airport covered in water vomit. Nice. I bought a t-shirt there just to have something clean. Mostly I was very embarrassed. Did I mention there were nine other people on the bus? People, I had just met. What a way to start a vacation. But once I got it out, I felt much better. But I think my sister may have been regretting her decision to invite me at that point.

We had a layover in JFK, where we stopped in a bar and started our vacation drinking early. After killing lots of time, we boarded our flight. I used to be able to sleep on a plane, but it seems I can’t anymore. Of course, the two crying babies probably didn’t help. They finally fell asleep and so did I. Not long after that, the pilot announced that we were approaching Heathrow.

Upon landing, we were met by a nice lady named Margaret. London is five hours ahead of our time zone, so we got to London around 10am. It was far too early to check in at the hotel. So, Margaret took us on a sight seeing tour of London. Bless Margaret she tried so hard. But we were so tired and sleepy and we were not very good guests. It did help me get an idea of where everything was, so that I could visit it properly later. Finally, when I thought the group was going to band together and off poor Margaret, we made it to the hotel.

We did not sleep, since we wanted to get our bodies on the proper schedule. So, I took my luggage up, showered and changed out of the vomit pants, thank goodness.  We then went to a group dinner. The meal was fine. Salmon cakes were edible. The dessert was fabulous. We were all so tired, it probably wouldn’t have mattered much anyway. That is the end of the longest day ever. 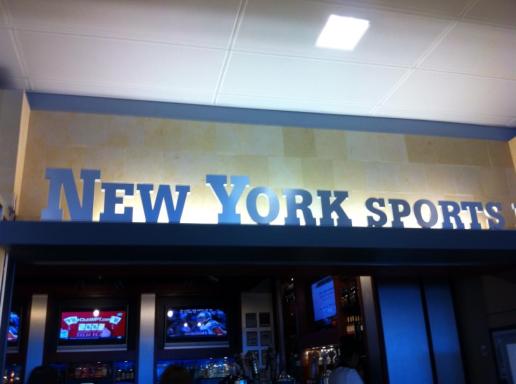 Bar in JFK that started our trip.

One thought on “London Calling”