This was our last day in London. We spent most of it shopping. We went to Camden Market and Portobello Road Market in Notting Hill. There had been a fire at Camden market the night before, so a great many of the shops were closed But what was open was pretty cool. If you have time and money, go there! The same with Portobello Road. No doubt there are bargains to be had. But there are so many fantastic artists at these markets, you will want to buy something. I have a great deal of self-discipline, so I left with nothing. Hah! I have no self-discipline, I just didn’t have time to decide on what to buy. Therefore, I really did leave with nothing. We did stop in an Italian Restaurant in the Portobello Market. Holy pasta, it was tasty! The chef had a special pasta that he ordered directly from Italy. And the sauce, oh the sauce. He made his own cheese, too. Such good food. Sorry, though, the name has disappeared from my brain into the ether. If I come across a receipt with the name. I’ll be sure to let you know.

After the markets, we had an appointment at Scotland Yard. Of course, we got on the wrong train and were a little late. I blame the construction they were doing. It turned us around every time. So, your asking yourself, “Why were you going to Scotland Yard?”  Well, we were there for a study abroad course in Criminal Justice. One of the trustees from the college where my sister teaches arranged a meeting with a former murder investigator there. He was a really neat guy and I was quite fascinated with the information he gave us. Where we have gun problem in the US, they have a knife problem. London has 8.3 million people and last year (2013), they only had 98 murders. Yes, 98. The difference is amazing. That’s not to say they don’t have their own issues. Can you say big brother? They are watching everything!

From Scotland Yard, we had a group dinner at an Indian restaurant. It was not very impressive. We were late, so I think that caused a problem for them. But it’s not like they were so busy they were turning people away. And the food was pretty unspectacular. 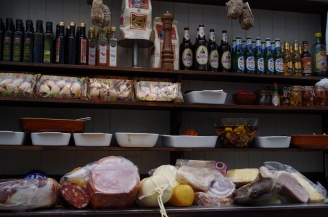